AFTER two years of muted celebrations due to the Covid-19 pandemic, both the Nine Emperor Gods and Navarathiri festivals are back in full swing this year in Penang, much to the delight of devotees.

As Taoists and Hindus welcome the two major festivals on the same day, big crowds are flocking to vegetarian stalls.

Many makeshift stalls are set up to cater to devotees who observe a full or partial nine-day vegetarian diet until Oct 4.

Spotted lining up for a vegetarian lunch at a roadside stall in Perak Road was property agent Zoe Yeoh, 35, who was glad to celebrate the Nine Emperor Gods Festival like she used to in pre-pandemic days.

“I have been observing a vegetarian diet during the festival for the past eight years. In fact, I started going vegetarian last night to cleanse myself.

“I will also perform prayers and participate in a procession if time permits.

“For the past two years, I merely packed vegetarian meals to take home and avoided dining in crowded places,” she said.

Penang Island City Council cleaner S. Malaidassan, 52, and his wife were also spotted packing dishes for their children to mark the beginning of the Navarathiri Festival on Monday. 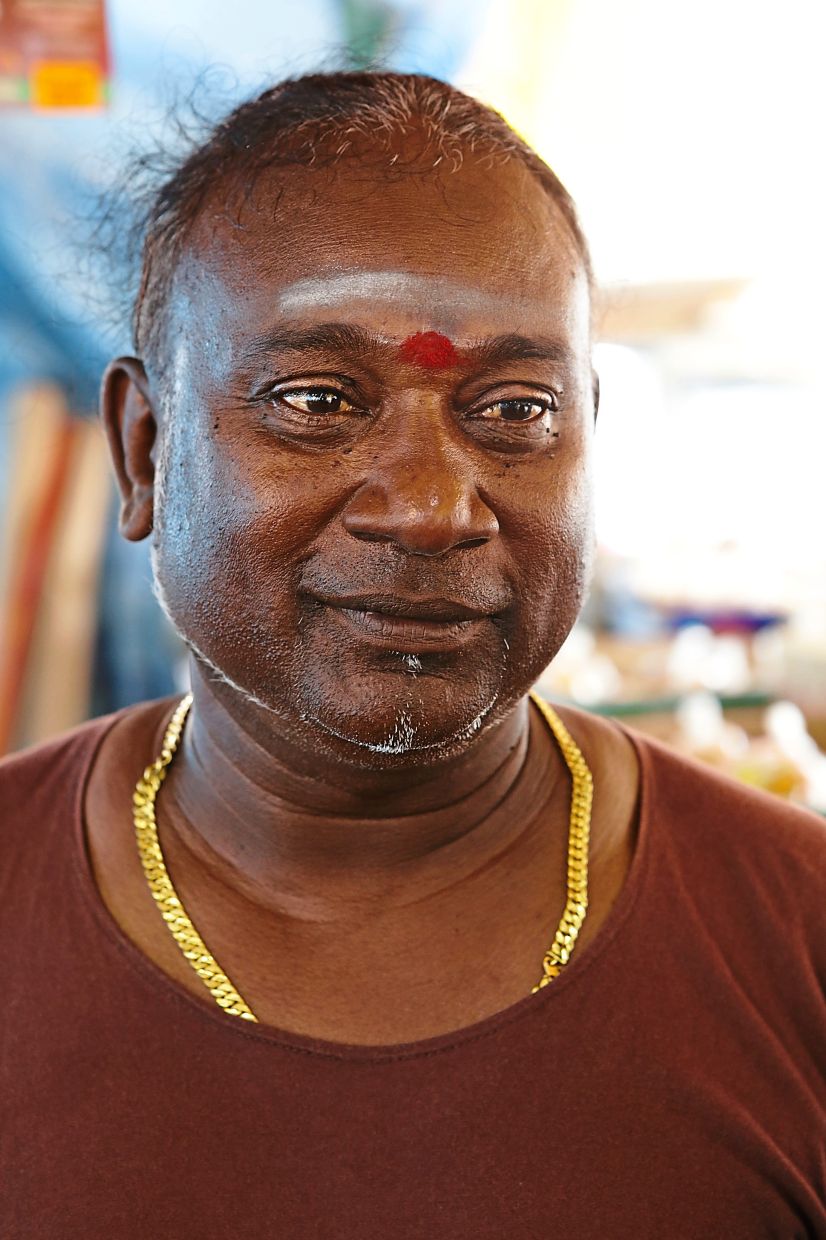 Malaidassan says his children will be joining him in observing a vegetarian diet this year.

“My wife and I have been observing a vegetarian diet for 28 years and this year, our children aged 10 and 12 will be joining us.

“To reward them, my wife and I are here to buy their favourites like curry bean curd and mixed vegetables.

“We also bought bao for my children to eat after school.

“My wife will be cooking vegetarian meals at home too,” he said.

Malaidassan noted that the prices of vegetarian food and vegetables had increased over the years.

“Despite the price hike, we will continue with our tradition,” he added.

Nurse S. Kanagess, 33, will encourage her daughters aged three and eight to observe a vegetarian diet for Navarathiri Festival by letting them pick their favourite dishes at the stall.

“I want to introduce the tradition to my children.

“Although my daughters find it difficult to follow a strict vegetarian diet for nine days, I will encourage them as far as possible,” she said.

Due to the increase in prices of goods, Kanagess will be cooking more often at home.

“The price of cooked dishes has increased by between 20% and 30% compared to the price during pre-pandemic times,” she noted.

Hawker John Ooi, 36, who sells char hor fun at a stall along Perak Road, said this was his first time selling vegetarian meals for the Nine Emperor Gods Festival.

“Before this, I served Western breakfast at a coffeeshop nearby.

“This year, I will be operating my stall from 8am to midnight.

“Although the prices of food items have increased by 20% over the past six months, I am selling my dish at an affordable price as many people are struggling financially,” he said.

“Business is picking up and I managed to sell around 40 plates on the first day,” said John. Ewe Jin says that he and his sister create five new special dishes every year for customers.

“We offer about 100 dishes for customers to choose from. My mother started with only 20 dishes and we added more choices over the years.

“Our most popular dish is the vegetarian bak kut teh, which will usually be sold out by 2pm.

“Every year, my sister and I will create five new special dishes to attract customers,” he said.

Open for breakfast till supper after midnight, his workers start cooking at 6am with the last batch of dishes served up at 8pm.

He said that although the prices of raw ingredients and vegetables had increased lately, the price of his dishes remained the same.

“A box of vegetables which usually cost RM60 now costs us traders RM100.

“However, we cannot increase the prices of our dishes as we understand everyone is having a tough time.

“I am expecting more customers during the next three days. The rain will not stop devotees from coming,” said Ewe Jin.

Over at Taman Lip Sin, hawker Goh Siew Yen, 39, got creative in preparing her laksa soup, using pineapple, green apple and turnip to enhance the taste.

“I run a bakery and only started selling vegetarian laksa two years ago for the Nine Emperor Gods Festival,” she said.

“The response was good, so I decided to continue selling it,” she said.

Temple chairman M. Patmanathan, 67, said that in the past two years, prayers were broadcast live online and only a small number of people were allowed to enter the premises.

“This year, we will perform prayers from 7pm to 9pm during the Navarathiri Festival.

“We will also hold cultural dances and serve free vegetarian food every night for the festival duration.

“On Oct 6, there will be a chariot procession,” he said.

To ensure public safety, Patmanathan said the temple had hired Rela personnel while 100 volunteers would be at hand during the nine days.

“We encourage devotees to wear face masks when they come. The temple can fit about 200 to 250 people at any one time.

“We are expecting 250 to 350 people daily, including devotees from Kuala Lumpur and Kedah,” he said.

As for the chariot procession, it will start around 5pm on Oct 6 and is expected to end at 1am. Patmanathan: This year, we will hold prayers from 7pm to 9pm during the festival at the temple.

“The chariot was made by hand over 60 years ago and refurbished in 2017,” said Patmanathan.

“The chariot will leave the temple for a 6.5km parade. It will visit Jalan Jelutong, Bukit Gelugor, Jalan Yeap Chor Ee, Island Glades, Island Park, Jalan Besi, Jalan Masjid Negeri and Jalan Batu Lanchang before heading back to the temple.

“We have 200 people following the chariot and refreshment tents will be set up along the route,” he said.

Temple chairman Datuk Khor Wan Tat said all events would be held as usual like in pre-pandemic times.

“The temple will be open around the clock.

“We encourage all devotees to wear masks and if possible, do a self-test at home to ensure they are negative for Covid-19 before coming here.

“The float procession will take place on Sept 30 at 7pm.

“In the past two years, only a few committee members took part in the procession from Pantai Bersih in Bagan Ajam to send off the deities. We didn’t have the usual grand parade to the sea,” said Khor.

He said 650 volunteers had been recruited to help out as the temple predicted a bigger crowd compared to the last two years.

“The festival will be full scale this year and we are expecting some 1,000 devotees daily. We are happy to welcome them back,” he said.

The Nine Emperor Gods Festival started on Monday and would end on Oct 4.

It is held on the first day of the ninth lunar month and is observed by the Taoist community.

The festival pays homage to the Goddess of the North Star, believed to control the Books of Life and Death.

Devotees believe the gods came through the waterways and processions are usually held from temples to a river or seashore as a symbolic gesture.

The festival coincides with the Navarathiri Festival observed by Hindus.

It is dedicated to three Hindu goddesses – Durga (Goddess of Bravery), Lakshmi (Goddess of Wealth) and Saraswati (Goddess of Knowledge) – before they combine forces to destroy the demon Mahishasura on the last day of this festival.